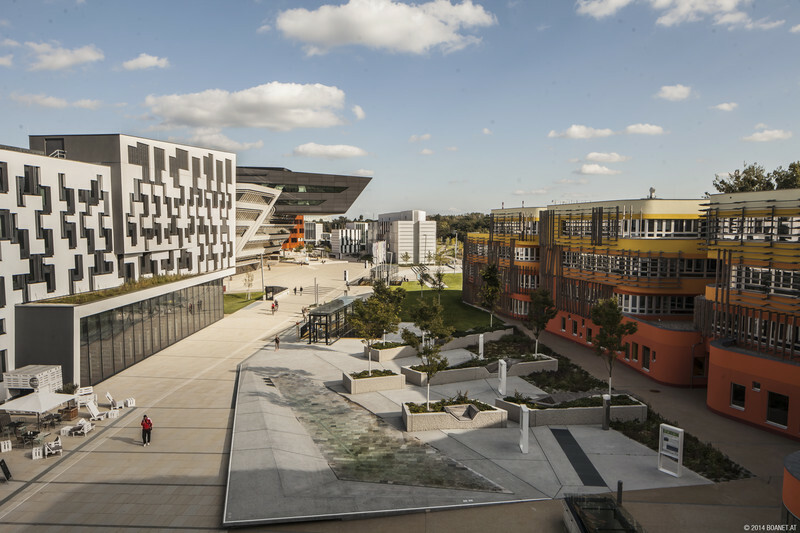 One of the things we learnt from Covid is the value of coming together to learn. Suddenly, children came to value schools and the opportunity to meet friends, chat and play together, as well as the structure and framework that lessons and schools offer. But what role do these institutions play, in terms of their physical form, in students' development. How can we share best-practice, and encourage social, physical and psychological learning?

Why is it that we can so often recognise schools architecture all over Europe? Are these buildings cliches? What would children choose for their own, child-centred learning? With climate change, can we bring more lessons into the open air?

Eugene's focus on this hip walk through the new Leopoldstadt is on inspiring children through brighter, more fun and open buildings for teaching in Wien. We welcome teachers, architects and children on the walk, to be part of the debate, as well as parents and anybody who cares about smart cities and future, visionary city-planning.

What are the key issues discussed when developing a new Vienna school, kindergarten or university? How much do they cost, and how can we make small budgets go further? Can you deliver inspiring architecture on a small budget, with an adventurous client? Vienna is now the youngest Bundesland in Austria, and there has been a big focus on school building and extension in the last few years. 10% of the population of our city are students - and a third of these are foreigners. The Central European University is slowly leaving Budapest and arriving in Vienna, with the media more focused on their architecture than politics, as they remix the Baumgartner Hohe Otto Wagner Areal (and the former Easybank HQ in Favoriten). NEOS have now taken over the Education department of the City council. What difference is this making?

Eugene was recently in Vorarlberg with a Green politician responsible for town development, and she said that to convert a typical school vorplatz (usually a car park) into a green space costs on average €300k. Why so much?

How do education and architecture relate to each other? They both form society, improve it, develop community, can encourage good mental health, and inspire people.

Our future is digital, and yet the way schools work now is deeply old-fashioned, with most having no wifi signal. But also critical-thinking, innovation, self-presentation, teamwork and happiness are important subjects missing from the curriculum.

Melisa Erkurt, teacher and journalist, wrote a much-discussed and beautiful, important book, Generation Haram, about how diversity should be handled in schools. We recommend every Viennese reads this campaigning book, full of ideas and insights about how Brennpunktschule can be improved. Anti-racism must also be taught in schools, she says, and we agree.

As the father of an eight year-old boy, Eugene also feels that the education system needs to focus on a better representation of manhood, since most teachers are female, and to move away from the toxic masculinity which leads to so many psychological problems and violence in young men. We need to understand the different ways of being a man, with more open emotions, friendship, networks and support, less macho and cold.

In UK now, there is a girls' hour on skateparks, where boys can only watch, to encourage more girls to have the confidence and support to learn to skate (and the courage to make mistakes, which is no problem for the boys).

Iva has interesting and funny stories of conversations she has had with developers and clients about the wrong things they think and say. Is there a lack of vision in educational architecture? No! We want to show you some beautiful examples of fine Vienna schools and universities. But also some crazy mistakes the city has made.

When a new extension opened in my son's school, Novaragasse 30, last summer, he led tours of the school for adults, including the architects, police, local politicians, teachers and a few parents. That is a good idea, and he was very proud. We should show that schools belong to kids, and that they are the ultimate focus of education - and the architecture that goes with learning.

Good school design can encourage kids to move more, to play, to dance, to eat together, to be more creative, to be happier. We should remember that kids don't just learn in schools - some avant-garde schools make lessons in tree houses, forests, factories, in parks, by rivers or on boats, on farms.

Students value routine and structure, which is often missing while you sit in home-schooling.

But Eugene hated school, left at 16, never went to university, and has no qualifications. But my mum was teacher, my dad lecturer (and my sis and bro teach at universities in Manchester), so I was the strange, wild kid in our family. My wife was also naughty at school - or independent let's call it – and we often wonder how we will react when our son is in trouble at school. Will we support the teachers - or our child?!

In UK and USA, schools are measured by the exam results of children. That is one measure, but a much more effective way to judge one school against another, is the ability of the children when they arrive into the school - and then when they leave. And that transformation that some schools achieve is magical and important, to raise the game of students and increase their ideas and engagement and ambition. Architecture can play an important role in this process.

There is an irony in Eugene making this tour, since I hated school, left at 16, with no qualifications, and was twice in trouble with the police as a boy, first time because of fighting - when I was arrested - and second time for stealing keys to the whole of Lawnswood School, which brought the CID (detectives) to the school to figure out how to reopen. I was really a scandal at school, and very problematic for my teachers. Sorry, to all of you, and specially Mr Lawrence!

Iva says that architecture is frozen politics, and we will look at this new way to analyse our Stadtbild.

So what will we visit on our walk? A typical grey Vienna Volksschule, the WU campus, an innovative Kindergarten, a cool new school, the bizarre Bank Austria Campus and the exciting Christine Noestlinger Campus in Nordbahnviertel, plus a couple of surprises on the way.

Before my son Josef was born, the Viennese looked at me dancing in the U-Bahn, or singing in the park, and were really quite worried about my mental health. But now they see me singing in the park or dancing on U2 and say, wow, what an engaged pappi he is. So my son has given me back my missing dignity. I love him. But he recently said to me, Pappi, is it possible that today we can go straight to school, without any adventures on the way, so he is starting to feel this bourgeois angst which is the dominant mood in Wien. His pappi should try to be more 08:15, like a proper pappi.

Eugene is a free-range parent, and will explain what this concept means, during our walk. Parents can learn so much from children, and this is one of more than 20 projects Eugene is developing, to celebrate the freedom, joy and creativity of youth. In many ways, he is a 53-year old child.

That schools, nurseries and universities are free in Vienna is a democratic, socialist and beautiful move.

Eugene's son Josef has started to correct his father's German, which is uncomfortable but also useful. We are now experiencing the first time ever in history where parents ask their children how the world works (digitally). But children need to learn how the internet commercialises friendship, love, fun and contact, and takes your data for money reasons.

Eugene was an English teacher at the Wienersaengerknaben for one year, 5 minutes from his flat on Karmelitermarkt, but also teaches sometimes at the TU Wien Raumplanung (spatial-planning) department.

Eugene and Monika had a son by accident, but are now thrilled to be parents, rediscovering the city, with so many joyous new perspectives, through Josef. We chose a school for him which is not Bobo, but a genuine mix of Vienna kids in 2021. In his school, the children are divided into six different religion classes. This is catastrophic - those children should all be in the same class, learning about each other's faith. As a non-believer, he visits no synagogue or mosque, and sits alone, with no teaching at all. A missed opportunity to teach tolerance and dialogue.

Eugene has developed a colourful 1-hour presentation, with his best friend Persy Bulayumi, to inspire Vienna kids to be more creative. Please invite us to inspire your kids!