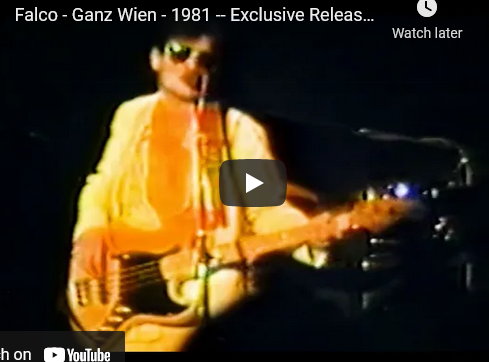 We are proud to be back as part of the programme for WIR SIND WIEN.FESTIVAL, having created more than 25 events for that annual celebration of Wiener Graetzln.

Where did the song and the pop star come from? We want to make some cultural archaeology, and take you back to the atmosphere of that hot summer of 1981. Before the fame, glam, drugs, who was Falco, why was he necessary, and how did he change the scene? We will open up the context of where he came from, the atmosphere in the city at the time - a declining city, with the oldest population out of nine Bundesländer. The scene was fairly grey, small and went early to bed. There was not so much avant-garde thinking. In fact, Ganz Wien was banned from Oe3, because of the line, 'Ganz Wien ist heut auf Heroin'. It was shocking, just like its singer.

What were Falco, his gang, and Drahdiwaberl rebelling against? Was everybody in Wien on heroin? Why did the young Hans Hölzel quit studying at the Conservatoire? What was his Mum like? Where was he living? Which bars were central to the scene? Which other pop music was in the charts? Why was he dressing so differently to his contemporaries? The 1980s look strange to us now, but in many ways, Wien was still in the 70s at that stage. In that sense, it is even more astonishing that this so 80s of singers should emerge so completely from a dull scene, with his filmic looks, acting and sound. Who were the other electronic pioneers? And when did Hans become the asshole we later read about?

Ganz Wien has become a slogan used in many contexts, including by Stadt Wien for the Donauinselfest in corona summer 2021, with their touring red bus. It is one of his best songs, and appeals to people who are not fans of his later, bombastic electropop. It remains fresh, and was recently covered by Der Nino Aus Wien. Even rap stars' Kreiml & Samurai (also from Wienzeile) nodded to him with their Ganz Wien last year. We will look at which other songs were popular that summer, to give some context, what was on TV, who was active in politics, and which were the important shops, but also mobility, education and the media scene. This is a storytelling tour, and we look forward to you sharing your stories of life in Wien, and reactions to Falco. He generated many stories.

This is Whoosh's and Eugene's second tour about a single person, after Otto Wagner, and later in June, a third will follow, looking at another pioneer, Hedy Lamarr. There are several ways these two, Hedy and Hans, connect: they were both West Wien performing pioneers, died within two years of each other in North America, and are both in Zentralfriedhof, changed their names, and were too big, too egotistical and too spectacular for Wien. They both had complicated relationships with their home town, but referenced it in their work. And they both pushed to the limits of acceptable taste, using new technology. Schwarzenbergplatz was home to Hedy, and location of Rock me Amadeus video.

We want to recreate the atmosphere of that hot summer and look at how he emerged from a subculture, was necessary and made sense at that moment. It is a piece of social archaeology. At the end of the tour, in the spirit of Falco, we will have a drink together inside the Falco bar on Schwarzenbergplatz - which is full of his memorabilia - to share stories and make new friends. Please join us.

Another feature of this tour is that we choose to twin it with another,
on 19 June, looking at Hedy Lamarr. Hedy & Hans have much in common: these two west-Wien pioneers changed their names, were buried in the east of the city, in Zentralfriedhof, and died within two years of each other in North America. They were multidisciplinary, interested in appearances, too big, too egotistical and too spectacular for Wien. They had a complicated relationship with their home town, but referenced it in their work. And they both pushed to the limits of acceptable taste, using new technology. Schwarzenbergplatz was home to Hedy, and location of Rock me Amadeus video.