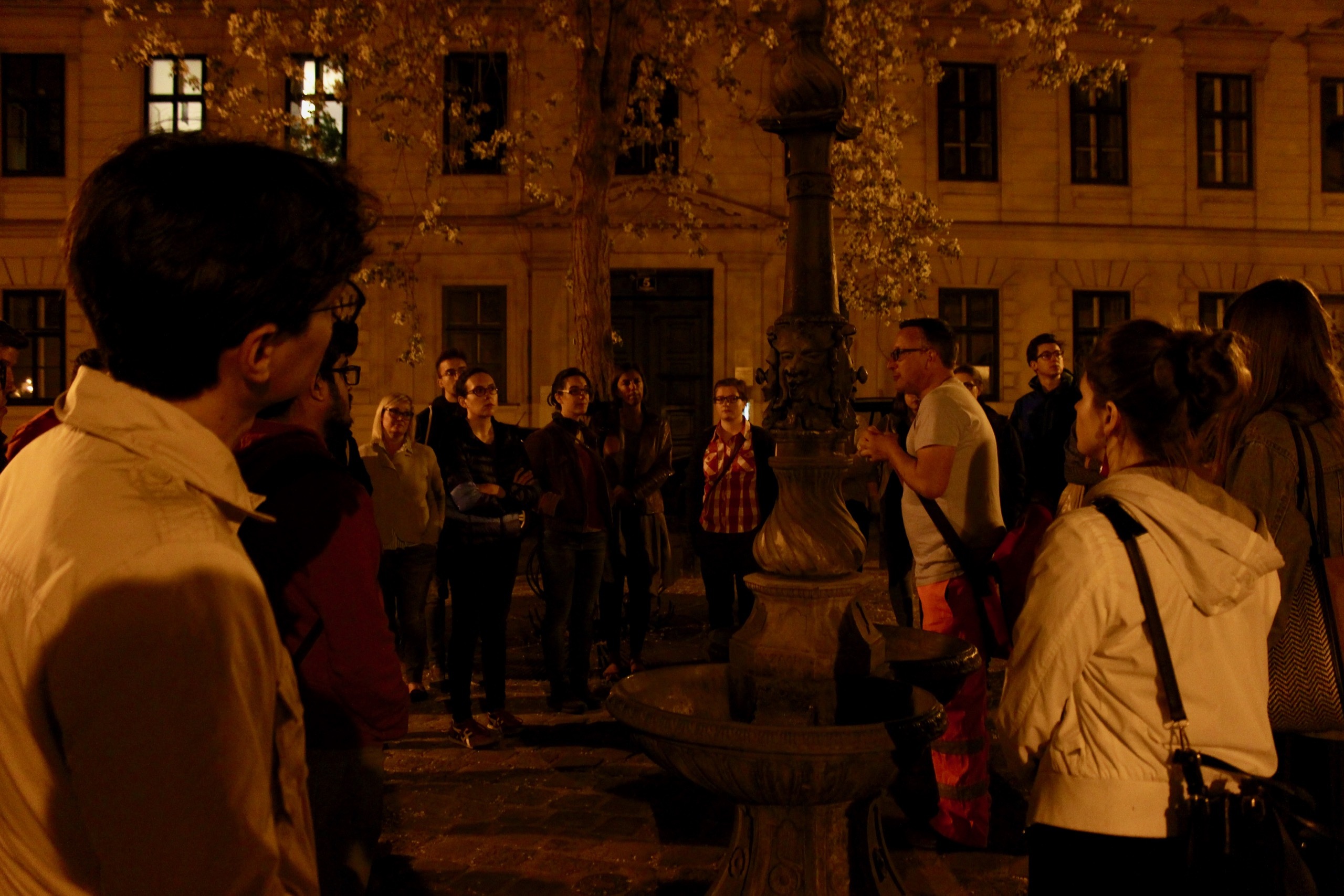 Vast sections of cities are ill-used by night. Here lies great opportunity, culturally & economically. Let's celebrate the Vienna night, & its dark side. We need cities to work as 24hr places to live. Why do nearly all tours happen during the day? We'll get an insight into the future of night-time in the global city.

Urban walking is a celebration of public space. And Vienna has world-class public space, though it is sometimes lacking in enough Viennese to really bring it to life.

Vienna’s city-planning is people-centred, and we want to explore this concept on our walk into the darkness. Whoosh uses non-academic language - and humour - to debate serious ideas. We search for new ways of looking at the city, which are just as interesting to long-term residents as visitors (smart city, overtourism, Brexit, smells, human rights, Russian influence, disruptors, and now the night).

Michael Häupl protested in 2014 that he did not want people to make comparisons between Vienna and a cemetery, though it sometimes feels that way. For international students, a colourful nightscene is a key reason to choose one university instead of another. Vienna is not a party city, but it still has its scenes, if you go looking for them. Martina Brunner, who campaigned as the N8BM, joined us for the last walk, and has now helped to create the Vienna Club Commission, which is researching and promoting dialogue between the city and representatives of different players on the night scene, from restaurants to club collectives.

We will also look at the different lifestyles of people in old and new parts of the city. All round the world, Vienna is understood to be a quaint, waltzing chocolate cake city, of palaces, dusty museums and horses. But instead of this sweet version of the city, Eugene is more interested in the salty elements of our reality in 2022: the Viennese dialect, Würstlstandkultur, the Street art scene, Gemeindebauten and Cafe am Heumarkt.

We’ll be looking at the night-time economy and the sense of place in north central Vienna. Not enough residents realise the value of the night economy – it is almost €2bn. We want to observe how many people are awake, and what they are doing. Not enough cities have a vision for developing & managing their nighttime economy.

So what is our route? We will start – where else! - on Stephansplatz, because tourists go to bed much later than locals. The Innere Stadt is for sure one of the most fun and loud Districts in the country. Then we will visit Bermuda Triangle, Schwedenplatz, then down along colourful Donaukanal.

Vienna is a much more friendly and open city at midnight than midday, which is not true in most other places. And there is much less German spoken in the small hours.

Our previous nightwalks were a success – in Floridsdorf on placemaking, the Ugly tour several times, from one end of the Gürtel to the other for Wir sind Wien fest, a Jane’s Walk on liveability, and a visit to every district, for the #kommraus Forum Öffentlicher Raum from Zollergasse along Westgürtel on the memorable night the Ibiza scandal collapsed the government, & as part of Vienna Walking Week 2020, from Yppenplatz to Steffl. Indeed that #kommraus tour was so open and fascinating that it inspired us to repeat this concept more often - we heard the Eritrean national anthem from 5 men outside Westbahnhof, chatted with a Würstelstandlerin, with the MA 48 cleaning the streets (who told us the difference between daytime and nighttime trash), a homeless person, some Eurovision fans, an Iranian skateboarder. Everybody wanted to talk to us, which was refreshing and unusual in Wien.

We need a global, 24hour planning system to ensure we are building better cities for us all, whatever activities we choose to do after 7pm. Many city leaders are developing tools that work through planning. In San Francisco, the city entertainment licensing agency are automatically consulted on planning applications within 100m of an entertainment premises. This includes new housing, office blocks and hotels. In London, music venues are being planned within mixed use developments from the very beginning of the process. In New York, the Mayor has created a Nighttime Ambassador (following the lead set by Amsterdam) to tackle a host of issues including burdensome regulations for licensed operators. Vienna’s Wien Gibt Raum is an exciting and dynamic tool to smooth the process of applying to this notoriously bureaucratic city to create a new event in public space. A one-stop-shop to digitally get permission to make your dream come true.

This tour is one of the projects we are calling Vienna Walking Week, to open up new forms of travel, inside your hometown.

No registration is needed (or possible) for any of our walks – just come along and join us. There is no maximum size to the group, so relax, it will not be sold out.

Eugene made interviews about this tour concept for both FM4 Morningshow & Oe1 Leporello in July 2020.