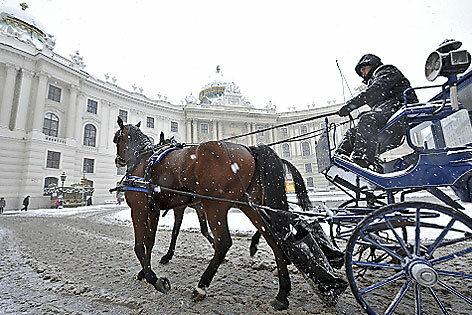 If you say the word 'Vienna' to people all around the world, they will hear music in their ears. And very fine music. This is valuable soft-power for a city, to have such a famous soundtrack. Some of the most innovative musicians worked here, and developed the city into a dynamic force in new sounds.
On this tour, we want to show you the acoustic depth of our home town, and how it feels to walk around the city. Which sounds tell you where you are? After our sight tour (15 best brick buildings), the diverse taste adventure for Coca Cola*s logistics meeting last year, and our Smells like WIEN Spirit tour to the most distinctive fragrances of west Vienna, we move to a fourth sense, hearing, and celebrate the city from a new perspective.
What tells you that you are in Wien, through your ears? We will explore public transport (from OeBB to trams), dialect, songs, 'Zweite Kasse, Bitte' grant, 'Augustiner, BItte', or 'Mit Scharfes' late-night Wuerstelstand talk, and the hammering of Schnitzel Koechinnen.
Beethoven spent 5 hours every day walking around Wien West, and he composed his music on the way. You can feel that rhythm and diversity in his symphonies. We want to reflect that on our tour.
Eugene was astonished that the Viennese knock their tables instead of clapping, at the end of academic presentations. WTF! And yet Viennese audiences are invited to clap every single employee at the start of an event, which is a spectacular waste of intellectual capacity. Do not bore clever people with self-indulgence, and specially not if you are thanking them for simply doing the job they are paid for.
Although this is not a sentimental tour, we will also invite participants to tell us of lost sounds they remember from their youth, and listen to some of them.
Rapid Wien is famous for the fans' Dreiviertelstunde applause.
Eugene is a trained radio producer, and cares very much for beautiful sounds, music and voices. And he finds Vienna sounds soooo good. There is no surprise that FM4 and Oe1 win so many international prizes - they care about our sound environment.
And yet, the Viennese are neurotic about sound, and get very angry with loud people. On Eugene's 50th birthday, the police visited three times because of complaints about the noise. This is the sign of a good birthday. My son, 7 years old, was the dj, and did eventually turn the music down at 2am, and go to bed. We were very proud of the third police visit. Immigrants are much more noisy than locals - and it is bizarre to live in a city of 2 million people and expect it to sound like the Dorf where you came from.
The inspiration for this tour came partly from Walter Wasner at the Bundesministerium fuers Klimaschutz, whose focus is on walking as mobility, and a stroll we made together in May 2021, along Donaukanal. Thank you Walter.
When RailJets depart Hauptbahnhof, they make exciting rising musical notes!
And Wien is a dog town, which makes its soundtrack loud and aggressive.
Wien is a musical city of silence, and we will explore why. We really should hear much more beautiful Vienna music on the streets of Vienna. For 2 hours, we will try to fix this.
Zum wohl!