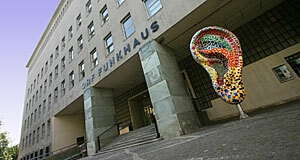 On 23 September, 2022, Oe1 will leave the Funkhaus, on Argentinienstrasse. They will follow FM4 up the western hills to Kueniglberg. Whoosh is sad, since we like the urban feel of radio being made in Wieden, instead of Hietzing. Oe1 will have significantly less space up on the hill, and may lose some of its identity. The closing of Funkhaus is based on a money-saving concept, but also a cross-media attempt at fusion.

FM4 has survived this switch, but we want to show you, on this tour, what it means to be based in a central part of the city. We will visit the three ORF buildings in the city - Ö3 in Heiligenstadt, Oe1/Radio Wien near to Karlsplatz, and FM4 over in Hietzing.

And in each location, we will play key recordings and broadcasts from different eras of ORF (and its predecessor RAVAG), to bring alive the streets and moments of this award-winning, vivid, contemporary broadcaster.

As a farewell to Funkhaus, Peter Waldenberger, one of the moderators on Diagonal (and also MusicBox & Hoerbilder), will bring us inside Funkhaus to show the atmosphere, space and history of ORF radio. Eugene & Peter have worked together on many progressive projects, & are fellow DJs from the name*it collective - who will say goodbye to magdas Hotel on 31 August, with fine music.