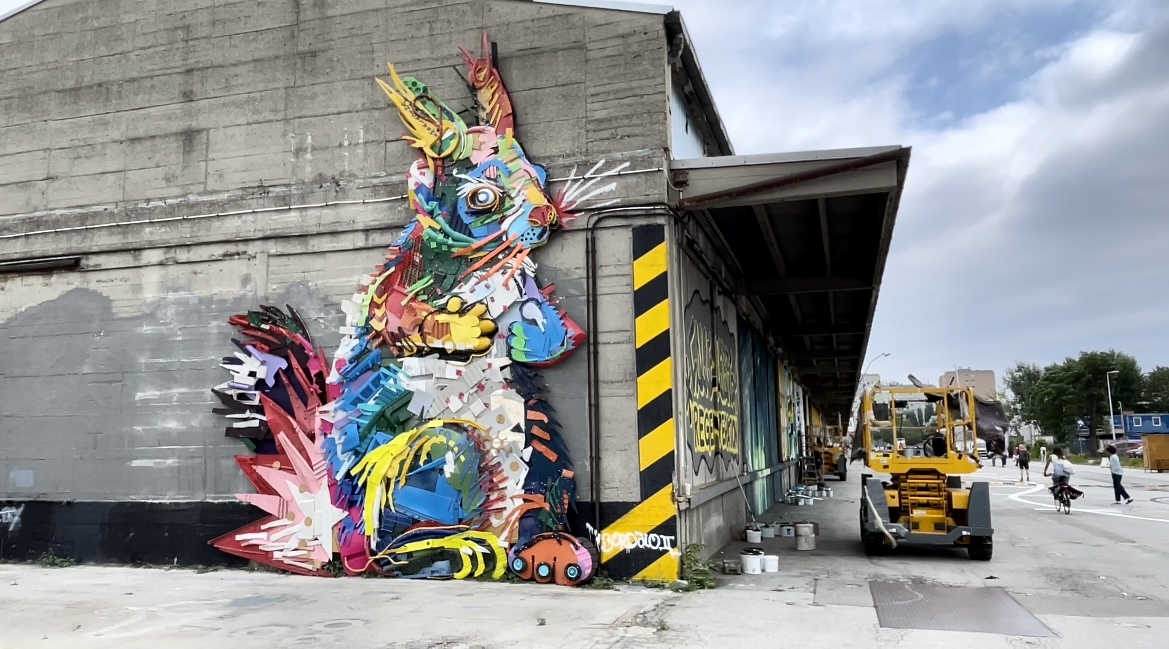 In celebrating its street art scene, Vienna has raised its international profile as a creative, rebellious and modern place. The look of the city has changed a lot in the past twenty years (also because of good new public space, more lively streets, vaping shops, shisha bars, the revival of street markets, new public transport and more international people).

There is now even a festival of the best sprayers in the world, every August, in Calle Libre. And this festival has a different theme each year, to which the artists must respond. You can watch the art take shape, meet other obsessives and attend some fine parties. Since that fest takes place in the same week as ours, we will make sure you know all the details about the theme in 2023. And everything is free with them. Indeed the city of Vienna asks residents which walls should be painted each year, so if oyu have a grey wall you want decorated and illustrated, please contact them.

Only since 20 years is it legal to make street art here.

Brigittenau remains one of the less-explored parts of our city, and we want to fight against that by opening up this dense, central, diverse, hidden space. This is one of the last chances to see Nordbahnhof, before it is changed into a mixed use new living district. We like these romantic, lost places, but will also speak about the dark history of the railway station. One satisfying detail about the connection between the station and the street names nearby: because Nordwestbahnhof connected Germany with Vienna, so many of the storage spaces in Brigittenau have German names: Sachsenplatz, Dresdnerstrasse, Donaueschingenstrasse (the source of our river, up in the Black Forest), Hannovermarkt, Leipzigerplatz).

The move to legalise graffiti was unpopular with both the press and population, but there is much less resistance now that our city looks less grey and more wild. In street art we see humour and politics, cool visions of the future, and a more feminine direction. We have a visionary city council to thank for this development. We must also congratulate Tom Grötschnig for documenting the local scene in books, and his collection of all the key players on viennamurals.at. He keeps buyers in touch with the underground artists, who mostly remain anonymous.

We should also recognise the fine role Kunst im Öffentliche Raum (KoeR) plays in commissioning and promoting good new public art on the streets, across different media. They are adventurous and cool. And this is mostly financed by Stadt Wien, which is definitely not the case in other cities. We are privileged to live in a place and time where the authorities see and value the part good art plays in social evolution.

Street art is political, responsive and a fast medium to communicate new ideas. If you want to tour the scene, you need to wake up early to find out what happened overnight, on the streets of our city. Like so much popular culture, its origins lie in Black Americans and their endless desire to reimagine dancing, fashion, music, art and language itself. At the same time, street art remains naughty and often forbidden. We will look at the difference between graffiti (which means handwriting in Italian) and street art (which is often associated with gentrification). What is legal? What do the pigeons mean? Who paints it? How much does it cost to ask them to decorate your space? How many women are on the scene? What is the connection between graffiti, drugs and gangs? How many people actually do this as a job fulltime? Do they make any money?

But also, how will Nordwestbahnhofviertel look in future? How will it connect with Nordbahnviertel, Leopoldstadt and the wider city?

After the abandoned station (which is actually a storage area), we will pass through Augarten (home of some illegal and fascinating graffiti) and then onto the home of spraying in Wien: Donaukanal, to show the contrast between curated and freestyle public art. Vienna tourism like to call the kanal the longest open-air gallery in Europe, ideally viewed from U4, which is an interesting new take on the city.

And finally, who is Banksy? – on show until March 2023 at a full-scale inauthentic show in Vienna. This is his real identity. But the fascinating thing is that many people just don’t want to know who s/he really is, since the mystique and romance is then lost, and the speculation ends. So keep on fantasising, y’all, while the rest of us know the truth.