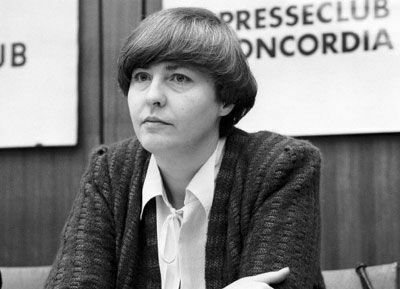 Johanna Dohnal was a feminist pioneer. Using humour, determination, persuasion and skill, she changed many details of Austrian life, and also the way people thought at the time.

She was Viennese, and learned the hard way about the difficulties of being a girl and woman in the 1940s and 50s.

On this tour, we will explore her beliefs, where she lived and worked, how necessary her ideas were, and look at the context of her life. Her resilience is reflected across the city, from art to a film, books, buildings and a street name. Some of her struggles were within her own political party, to show that women's needs are in fact society's needs, and affect everybody. Vienna later became a visionary city in issues of gender-mainstreaming, and gay rights. Dohnal became one of the first women's rights ministers in a European government.

This is a storytelling walk, and Eugene aims every year to tell more women's history, since it is under-represented. This will be the fifth of his tours about inspiring Vienna figures, after Otto Wagner, Hedy Lamarr, Freud, and Falco.

Vienna Walking Week celebrates the contemporary city, and shows locals they do not need to fly away, to get the benefits of a summer holiday.