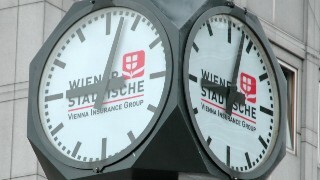 A tour exploring the concept of TIME in Vienna. How fast are we moving into the future? Outsiders say we live in a sloooooooooow city.

How do culture and rhythm influence our perception of development? Language changes how we perceive time, and Viennese say 'Wie spät ist es? (how late is it?), not what time is it? This is a more stressful way to understand our day. https://www.bbc.com/future/art...

Eugene lives outside his own time zone (GMT - Greenwich Mean Time) 1500km away, and in a space which stretches from west Spain to east Poland. The EU puts pressure on some countries to conform to the middle - Italian/German - time space, and this makes less sense for Hungarians, who walk home from school in October in the dark, and for Galicians, who awake in darkness in winter.

Austrians write their address backwards, with family name before 'first' name, their street name before flat & house number, city name before the more local postal code. This is putting everything backwards. wtf!

And of course, auf deutsch, numbers are said inversely, which creates maximum confusion in international situations: 4-and-20, instead of 24. That '&' is not necessary and wastes our time. Euge's son Josef continually says his Anglo numbers backwards, since he sees them in German and says them in English, instead of in the logical sequence. He answers maths answers in German, which are false in English. We need to make this universal. Let's focus on mathematical efficiency!

Central European Time is expressed as CET - which is one hour ahead of Greenwich Meantime. And why is London the centre of the world? Because of the Imperial ambitions of UK.

Euge is insomniac, and therefore fascinated with time and how it passes, in both early morning and late at night.... I am both owl and lark. You find me in the morning and evening.

Eugene finds it fascinating that women smell differently to men, across time, depending on hormones, weather, fertility and age.

Eugene loves the night, and has been leading tours into this less-explored time, since 2017, with his roxy tour of every Vienna district, starting at midnight and ending 9am.

Time seems to move slowly in Wien, right? I find this intriguing. But Why?