What Christmas means for Atheists: A Tour 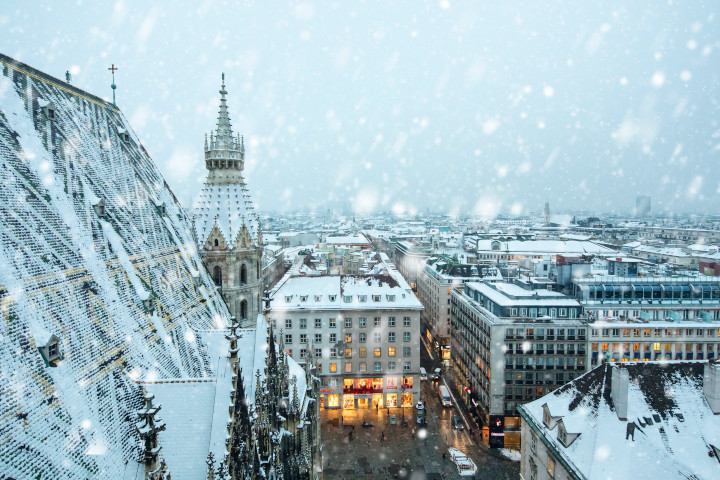 This walk was great fun and very lively in December 2022, with an engaged group enjoying the music and joy on the streets of Wien.
Eugene loves Christmas. It is a time of rituals - and many people find social rituals attractive and valuable. A festival of light, of peace and togetherness. Christmas is the most romantic time of the year. It breaks the rhythm of the year, and is very distinctive. It is a time to remember some things, and to forget others. We are all allowed to dream a little, to make family walks, dance and giggle. We cook together, read to each other, watch films as a family, and reflect on the year that’s past. It’s a time for children, and for adults to be more like kids: presents, sleeping more, playing, singing, cosiness and closeness, simpler days, working less, excited anticipation, of time slowing down, going to lots of parties, and being more silly than usual.

With thousands of migrants in Vienna, far away from family, we want to avoid feelings of loneliness, by bringing some of these people together for a festive walk, on 11th December, exploring what Christmas means to non-believers (and those from other faiths). It will be a celebratory, social and engaged way to connect, at this special time of year. And an opportunity to share stories of the different ways people celebrate in all the countries of participants.

We visit some beautiful, quiet squares, look at shop displays, a church (for the architecture, crib, candles and music), enjoy seasonal smells like gingerbread, pine trees, incense, mulled wine, cinnamon, cloves, goose, chestnuts and new books. And explore typical food and drink connecting Wien with Christmas. Since this tour is in English, and focused on outsiders, a secondary theme will be the ways in which the international community has helped push the city into progressive change, compared to when Vienna was a more Austrian city, before EU membership and the fall of Iron Curtain.

What does it mean to mark Christmas as an atheist? Many Americans have become so sensitive about offending their Muslim or Jewish friends that they send cards with Happy Holiday, instead of Merry Christmas. Eugene believes this political correctness is unnecessary, since he would be thrilled if he lived in Marrakech or Istanbul, and friends wished him Happy Eid. It is a sign of inclusivity and belonging. Christmas has for a long time been about much more than Jesus. Late December is a cultural holiday, including elements everybody can enjoy, without believing in God. It’s a time of community, of sentimental, funny films and of relaxation and good food. And Christmas is connected to charity, from cooking for homeless people to Band Aid’s fundraising song, Do they know it’s Christmas. The concept of a midwinter celebration of light, and cosiness, is much older than Christianity, revealing a universal human desire for connection and hope in dark days.

And Vienna is good at Christmas and romance. In contrast with the Anglosphere, central Europe sees a less commercial, less kitsch, less loud, less drunken yuletide, with more focus on family, on tradition, conversation, stillness and on fine music. A lot of the sense of Christmas is very sugary, hyped and artificial. But we can escape that. It is about so much more than that. At the same time, the sense of a pilgrimage home to see family is a central part of the season, and was missing for many of us in 2020 and 2021.

Along with alcohol and food, music is a central part of getting into festive mood. Many of the key Christmas songs were written by Jewish people, in an attempt to reach out beyond religion to the less sacred parts of the festival, like snow and trees: I’m dreaming of a white Christmas, Rudolph the red-nosed reindeer, Chestnuts roasting on an open fire, Let it snow let it snow let it snow! Instead of endlessly repeating the classics, like John & Yoko’s Happy Christmas (war is over) and The Pogues’ Fairytale of New York, it’s important that we find contemporary ways to reflect the season in song: indie hipster Sufjan Stevens modern O Come O Come Emmanuel plays with the form. And Polarkreis 18 update the melancholy winter theme here, with Allein Allein. Odd to think now about heroin-addicted David Bowie singing with Catholic crooner Bing Crosby on one of the most famous Christmas songs of all time. Recorded in London in 1977, while Bowie was living with Lou Reed in Berlin, and just five weeks before Crosby died, Little Drummer Boy/Peace on Earth is very moving. Returning to Eugene’s English heritage, In the Bleak Midwinter is one of the best British carols. Showing the full range of the season, we have a tune from 1581, and some stirring soul. The best spiritual music ever is for sure Bach. In fact it is some of the best music anywhere, in any genre.

Many people find comfort in returning to the same films each December. Eugene’s favourite is The Snowman. Almost nobody in the United Kingdom knows Dinner for one, screened each New Year’s Eve across the German-speaking world, but we sure as hell watch Sound of Music every Boxing Day, to 'learn' Austrian history and music. And redemption is a key message in so many festive films. Hope for everybody, and peace. Good values which we should celebrate, and not see as naive.

One aspect of Christmas which fires up us Anglos is seasonal advertising - perhaps reflecting the turbo-capitalist nature of New York and London. Here is an example, marketing a British supermarket, a chemist and a commercial from Wes Anderson, for cheap Swedish clothes. Another key visual difference, in the Christmas experience in the Anglo-Saxon world is a ton of Christmas cards sent and received, many with just a name written in, and no other words. But with crazy, kitsch design and banal messages on the front. In Australia and Brasil, they send Christmas cards with snow and pine trees, even though it is 35C in December.

Easily the best book to get you into your Christmas groove is Charles Dickens’ A Christmas Carol, which helped to invent the season for Victorian British people.

While Christmas is a time of excessive consumption - and Eugene as ecologist opposes this - it is also a moment when people return to their small town roots, and are less snobby, in the context of their own family and friends. Big city people see who they used to be. That is socially and politically useful.

We may see Catholicism as a socially-conservative faith, but in music, art and architecture, it never was. Both the Wotrubakirche in Mauer, and the Kölnerdom stained-glass window from Gerhard Richter, are glorious and revolutionary. It is useful to recall that both da Vinci and Michelangelo were gay, but this did not trouble the pragmatic popes of the time. We get so much great music from religious belief.

Christmas is great storytelling, of moving stars, of sacrifice, worship, wandering, magic and a virgin story, which many non-Christians enjoy. For us optimists, Christmas is also one of the times where we are allowed to feel central to the party, and not pushed to the periphery. You can really feel the joy when you walk into some parties, families and bars. If you share our positive approach to life, one key thing we can learn from the Americans is thanksgiving, to look back at your year and discuss the best things and moments, and thus to inspire your friends. We should all give more thanks – it is understood as a useful way to improve our mental health.

Sadly, Austrian schools close at 15:30 on 23 December, making it very challenging for the 53% of Vienna children with a migrant background to travel back to the country of their parents this year, in those 8h30mins between school ending and Christmas beginning. And also very expensive. As everybody knows, the build-up to Christmas is much more exciting than the time after 24 December, and we should be free to enjoy it. It is a big mistake for Vienna schools to close so late, since so little learning is done in the days just before Christmas, but then there is much wasted time, waiting for the schools to re-open, until 7 January. Schools in future should close earlier, and re-open earlier. Teachers' unions are deeply conservative on this issue, but in fact very few Wien children go skiing in January - or ever!

There is a sense of release & joy at this time of year, which - connected with alcohol - brings out the truth in some quiet, respectable folks. And so Eugene met a couple of his most important lovers exactly in those colourful, memorable and strange days. He will tell the story of one of these Christmas encounters on the tour. Brits have a tradition of kissing under the mistletoe, from schools to offices. It has led to the phrase, a Christmas kiss.

One of the things we increasingly miss, in a fast, postmodern, digital world, is shared national moments - where everybody is talking about the same thing. A few things still provoke them: big snow, big sports events, terrorist attacks, but they used to be common, in a simpler, less-atomised world. They are valuable, and bring unity and dialogue. And Christmas still regularly delivers this feeling.

Americans have been very good at creating a certain sweet version of Christmas, which is influential globally, in films and songs. But many of the traditions go back to Germany and the UK, and are influential also.

Alongside darkness and light, a second midwinter theme is snow. The coldest day of the year in Vienna is 31 January, so it rarely snows five weeks before this date, in an age of climate change. But to those pessimists who love to complain about dirty city snow, in a city like Wien, they should be reminded that 49% of the city is green space, so it’s easy to find pristine, untouched, virgin snow to play in, and build snow-women sculptures out of. Or roll in. or take atmospheric pictures. Just like in the countryside, but near your front door.

The concept of Englishmen reinterpreting Christmas is nothing new

No reservations possible - just show up on the day. This tour can also be part of company Christmas celebrations, before a shared meal, or as part of a private party.