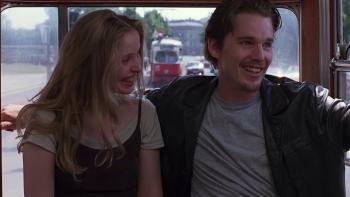 Few films make walking look so good. And most films about Vienna are either set 150 years ago, or feature unpleasant people. So we choose to celebrate a modern, funny - and romantic - film, where a French woman meets an American man on a train from Budapest to Vienna, and he persuades her to get off the train and explore our city across 12 hours (with not much money). All the action takes place on 16th June 1994, plus into that night, so we will make a 30th anniversary tour, seeing how the locations have changed, and remembering key scenes, pieces of dialogue, and the Viennese figures who drift into the action (not all of them attractive or sane).

The choice of that date by director Richard Linklater is no coincidence, since James Joyce's iconic modernist novel Ulysses is about a sexy and wild walk around Dublin on 16 June 1906. And the subtle literary references continue, with Jesse reciting a WH Auden poem at the end of the film, on the Albertina stairs. This fits well, since Auden died in 1974 at the other end of this same street, next door to the Moulin Rouge.

Please come and share your memories, impressions and experience of watching this fresh movie. While tourists adore this film (and the two sequels which show the couple's later relationship, in Paris and Greece), some Viennese get annoyed that the couple turn a corner in the film, and are suddenly in a completely different part of the city (but visitors do not know this).

This indie US film was released in 1995, to both critical and commercial success, and stars Julie Delpy and Ethan Hawke. It is based on a true story. And much of the dialogue was improvised, which adds an energy and play unusual in a film.