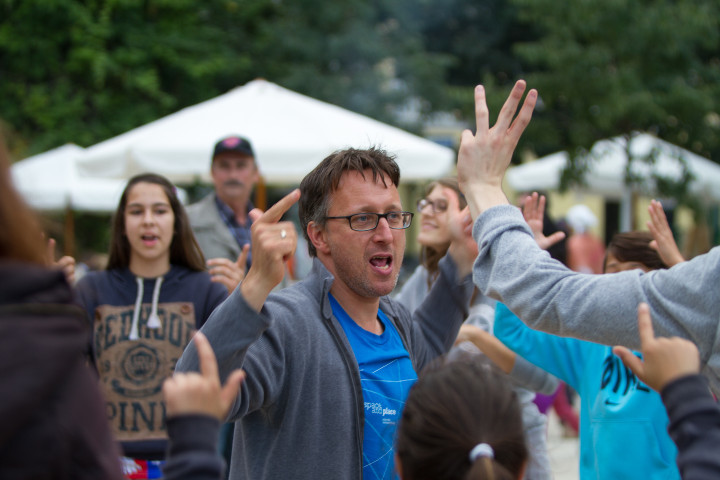 DJ is Eugene’s favourite role, but not his main job. His style is a London mix of film soundtracks, funk, jazz, soul, disco and feel-good grooves, a playful, freewheeling collection of party tunes, that has led him to play at Ost Klub, Arena, Elektro Gönner, Alte Post, Donaukanal, Rathausplatz, Club U, Lusthaus, Brunnenpassage on Yppenplatz, Urania, on the beach at Eisenbahnerbad, outside WU, at Oliver Hangl's SilentDisco on Wientalterrasse & Blumenwohnstrasse Markgraf-Rüdiger-Strasse, lakeside in Aspern, Meidlingermarkt, Funkhaus, Anaconda, RoterGürtelBogen, Brotfabrik-Expedithalle, Urban Future after-party in Messe, Hotels…-Kempinski, -magdas and -Ruby Marie, Schraubenfabrik, Vienna Design Week, Streetlife Festival on The Ring, on UK radio station LSR, plus so many house parties, weddings, pools, parks and gallery launches. Ideally open air. He has spun records alongside Kristian Davidek, John Megill, Jeschka Oszilat and other players on the Wiener scene.

There are too many cliché dj’s in Wien, playing the same abstract
electronica, with few beats, no rhythm and often no dancing at all.
For Eugene, this approach is all wrong - dance music is called that
for a reason. It is spectacular when a dancefloor erupts in collective
sexy joy. But in Wien the scene is more about sitting around
drinking beer and smoking and chatting, rather than self-expression
out on the floor.
Is the city too white, too straight and too intellectual? No! The dj is
playing the wrong songs. To dj should never lead to cliches – music
has always been about the next big idea, and innovation. Instead
we get bland gallery music with no words or ideas. If a song is
completely unfamiliar to the audience, it’s less likely to move them.
Disc Jockey culture was born in 1950s black America and Jamaica. Being MC was always about pushing things forward. And wild parties. Neither of which is easy to find in Vienna. The ethnic clubs in Vienna provide much more dancing than the local scene ever does.
Eugene finds that cool is over-rated, and what matters more is joy
and passion. He mixes up 70s soul grooves with Led Zeppelin,
Moroccan mountain music and Irish jigs. Anything to keep the crowd
dancing.
A simple story illustrates so much about what is wrong with the
dance scene here. Eugene tells of a friend who was at a ‘cool’ party,
and asked the dj for a song he wanted to dance to. She expressed
astonishment and said: 'Bin ich YouTube?' (Am I YouTube?). And you
understand from this reaction that A) Vienna dj's are less interested
in how the crowd react to their songs. B) Since nobody was dancing,
that his promise to dance to the song meant nothing. Dancing is
often irrelevant to Vienna dj’s. Maybe even irritating. Many are
performers in an art scene, and certainly not there to please the
public. Or cause people to dance.
Dancing is like a carnival, freeing you from what you normally are;
dancing together creates harmonies between people with different
tastes. Dancing is non-verbal communication, and opens up
dialogue between people who share no words. This is illustrated at
the beautiful Caritas Wien project Brunnenpassage, where new
immigrants mix up with long-time residents to share culture and
rituals through dance. Dancing is self-expression, identity, sex, joy, group connectivity, wildness, freedom, cool, creativity, release, art. Join us soon.